A Dash of Milk Madness? 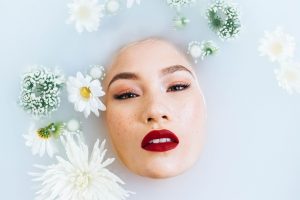 So this is not news to most people who know me but I don’t like taking things out of people’s diet. As a result, in a room full of naturopaths & integrative medicos, I might be voted the least likely to use the phrase, “No Gluten or Dairy for you!” [said with the Soup Nazi’s accent from Seinfeld]. I must have slept through that class when we were taught to do this for absolutely every patient.  But seriously, I try not to remove or exclude foods without a very strong rationale and evidence-base that relates directly to the person sitting in front of me, for several reasons: 1) those seeds are powerful ones to plant in your patient’s mind…how do they carry that with them as they move through life, navigating food and social settings etc etc…all well and good if this is a proven life-long pathological provocation for them but otherwise… 2) dietary exclusion is stressful for families & in kids especially, can create disordered eating and a range of other psychological impacts and 3) GFDF diets are not necessarily healthier in the basic nutrition stakes…if you haven’t read Sue Shephard’s work on the deterioration of diet quality in GF patients…you should. It can be much healthier of course…but often the real-world application of the principle doesn’t always match the lovely ‘serving suggestion image’ on all the GFDF highly processed, packaged foods!!

So listen up people, because now I’m talking about when I would seriously consider joining in on the GFDF chant.

The one patient group I’ve never quibbled over the benefits of GFDF, has been the autistic one.  I was taught the merits of this approach early on by a few fabulous courageous integrative doctors and paediatricians who came back from the front-line of their clinics, reporting good effects.  I then had the important firsthand experience of unprecedented verabilisation in a non-verbal ASD child’ after excluding these foods. But what I’ve been thinking a lot (and reading a lot!) about lately is the possibility that these ‘dietary exorphins’ may have negative mood effects in other subsets of mental health patients. My thought process is like slow TV! That aside, there’s a lot to be said for taking the time to really getting across an issue – even if that involves reading papers from as far back as the 1960s when the idea of a negative role for dietary exorphins in schizophrenics was first floated by Dohan & colleagues.

Let me say, when you go back to the beginning it’s undeniably a shaky start for the exorphin evidence base, but as you read the studies that emerge from decade to decade until the noughties…it reveals a nagging research topic that won’t go away and a fascinating process of discovery.

So is the devil really in the (regular commercial cow’s) milk? Well I think  for some patients it may well be a contributor – most notably those with features consistent with the pattern of excess opiate effects including a higher dopamine picture, regardless of the mental health label they’ve been given, although, more commonly seen in ASD, psychotic presentations etc.  But how do we work out which ones, because none of the evidence points to it affecting 100% of these groups…well that’s where we need to go back and truly understand the structure of these dietary exorphins and just how they potentially wreak havoc in some.

The latest UU30 takes your through the story of BCM-7 with a summary of research compile over half a century in Under 30 minutes!

MIlk Madness is it a thing – part 1
There is a well-rehearsed chant in the integrative management for ASD individuals, “Gluten free- casein free diets” is based on the dietary exorphin theory which suggests these foods generate bioactive peptides that act unfavourably in the brain.  Where did this theory emerge from and how strong or weak is the evidence upon which this therapeutic intervention stands? Even more interesting, is there support of this theory in a wider range of mental health presentations such as schizophrenia, post-partum psychosis and depression. Is there such a thing as milk madness for a subset of our patients?
Hear all about it by listening to my latest Update in Under 30: Milk Madness – Is it a thing?
For all Update in Under 30 Subscribers, it’s now available in your online account and if you are not a subscriber you can purchase this individually here.