Less Iron Proves More in Some BUT Not All Patients 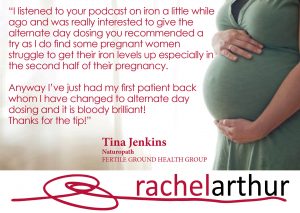 I need to clear the air, to clarify.  If you’ve listened to my So you think you know how to treat Iron deficiency podcast and implemented a less frequent dosing regime and it’s worked like a treat for your patients, like Tina….HOORAY! And if you tried out this protocol and instead your patient’s ferritin plummeted…listen up.

Something I said during the podcast but likely needs re-emphasising is that this strategy of separating each dose by at least 48 hours is for those patients who are non-responders. This means their iron stores have failed to really budge in spite of big (>50mg elemental iron) daily iron supplements OR for those individuals, of which there are many, who simply can’t tolerate large iron doses but their ferritin is bottoming out as a result 🙁

So just to balance out the feedback…it’s true my days are not exclusively punctuated with good vibes & pats on the back ;)… I also heard from another practitioner whose vegan client’s ferritin had increased  by about 30mcg/L on 50mg iron daily and after hearing my podcast, she decided to try pulling the dosing back to alternate days.  So, unsurprisingly (to me), her next lot of bloods showed a drop in the iron stores.  Why?  Because she is a vegan, so there is little iron outside the daily supplement dose itself coming in, she is ‘hungry’ for the iron, and in response to this her body is appropriately increasing her iron transporters on enterocytes to improve uptake in the gut and increasing the number of taxis for iron in the blood (transferrin) and there are no other issues at play like inflammation, to mess up this lovely example of nutritional physiological compensation.  She is not the right target for this approach.

“I listened to your podcast on iron a little while ago and was really interested to give the alternate day dosing you recommended a try as I do find some pregnant women struggle to get their iron levels up especially in the second half of their pregnancy.

Anyway  I’ve just had my first patient back whom I have changed to alternate day dosing and  it is bloody brilliant! Her ferritin had previously dropped from 30 to 18.4, this was even on Solgar iron 2 BD ie total ~ 68mg/day. So I changed her to Floradix (which I love love love as I have found it in the past is great in that last stretch of preg to increase iron) and did alternate day dosing  20mls BD (ie so ~ 40mg/day elemental Fe) combined with Vit C 500mg BD. And now her ferritin has gone from 18.4 to 63!!! in the space of 6 weeks.  Bloody rippa!!! anyway thought I would share the good news.  She is 34 weeks pregnant. I have changed a lot of my pregnant patients onto the alternate day dosing so I am hoping that I see such great results with all of them:) Thanks for the tip!

I was hoping that I would see some improvement in her ferritin but I wasn’t expecting it to jump up so high in that space of time. I couldn’t believe it.”

So why did it work in Tina’s patient and so many others?  Because, in contrast to the vegan patient, while these patients are also ‘hungry’ for iron, they are not putting out the welcome mat for this mineral via the normal physiological adaptation described above. In fact, they’ve pulled in the welcome mat, slammed the door and bolted it…blocking those little doorways along the small intestine that iron uses for absorption (DMT1).  They have done this due to high hepcidin levels…where did that come from, you ask…well that’s where you might need to go back and listen to the story from the beginning 🙂

Need more help with your iron non-responders? The reality is we all struggle at times with correcting low ferritin or iron deficiency anaemia  – so what have we got wrong?  In spite of being the most common nutritional deficiency worldwide, the traditional treatment approaches to supplementation have been rudimentary, falling under the hit hard and heavy model e.g. 70mg TIDS, and are relatively unconvincing in terms of success. New research into iron homeostasis  has revealed why these prescriptions are all wrong and what even us low-dosers need to do to get it more right, more often! So you think you know how to treat Iron deficiency will talk you through all this and more.