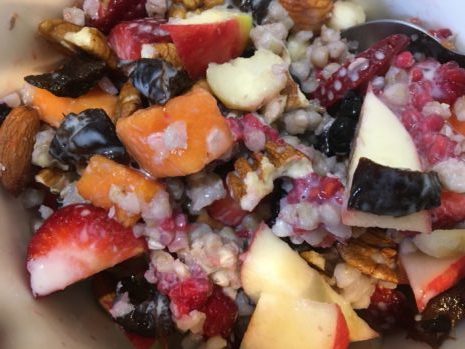 You may have noticed I don’t often have recipe raves, swap serving suggestions or generally dialogue about diet.  That’s because about a decade into my career as a naturopath I hit food fatigue – my enthusiasm for explaining basic food swaps and increasing kitchen competency with clients, back to back, day in day out, took a bit of a nosedive. Admittedly, the significant time I spent on oil and gas sites educating workers about the same things ad nauseum, in the early part of my career, may have hastened the arrival of food fatigue for me a little earlier than others. There’s nothing like feeling the need to ask the few male miners who bothered to turn up to your talk, ‘Does your index finger work?’  to convince them of  their capacity to make smoothies – to wear a gal down 🙄  But today I heard another practitioner comment on a patient’s breakfast choice with a simple but eloquently said: ‘Nah, it tastes too good, that can’t be right!’

This took me way back.
I taught my kids (when they still were!) that the breakfast bench test was easy: any cereal you would be happy to eat straight out of the box or bag was a ‘no’.

I also used this with my patients.  Somewhere along the way – let’s say in the seriously over-committed second decade of my career and, as it happens, my mum role, I lost my way, and after rearing my kids on such truisms and a wide selection of hand-cooked ‘wholegrains’ for breakfast – millet, buckwheat, barley – I morphed into a ‘muethie mum’ (muesli or smoothie). To be honest – the transition was seamless and insidious – buried under a seemingly never-ending list of tasks I had to get through – it’s only in hindsight I can see the shift. But I’m here to announce, the buckwheat breakfast is back baby & it’s back for good!

Not puffed not milled to make pancakes, not processed in any way.  Just boiled.
(gotta love the purple in the water that screams polyphenols!!)

A pseudo-grain, of course, that’s high in protein, lower in phytates.  Served with lots of fresh nuts, fruit, a couple of prunes for even more polyphenol punch and some yoghurt. Costs about 30cents a serve for the buckwheat – so my big boy tells me- and it definitely passes the breakfast bench-test.  I don’t have any desire to eat the thing on its own, ‘out of the box’, but boy oh boy with this combo…it’s worth writing about, in case you too have had a bit of food fatigue and are ready to start your recovery 😉