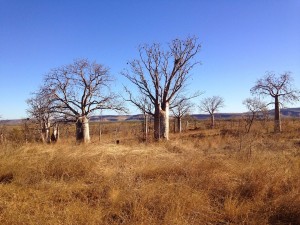 Well here’s a thought…the ‘Superfood’ nutrition movement has just about eaten the South Americans out of quinoa and the Pacific Islanders out of coconuts..isn’t it time for a local hero?  I get a bit despondent when any new food is touted as a ‘Superfood’ anyway for all the obvious reasons but this is heavily compounded when this so-called ‘Superfood’ and the bankable gross exploitation of this foodstuff comes at a huge cost: whether that be in terms of food-miles, another population’s access to their food staple or the radical change in land management in these countries that often follows, e.g. think palm oil plantations.

The idea that Australian indigenous foods offer many so-called ‘Superfoods’ is not new but I did get excited yesterday when I saw on the ABC that leaves of boab tree native to the Kimberley Adansonia gregorii,  have been found to contain 26 mg per 100 g,  compared with 3mg per 100g contained in beef.  Iron deficiency anaemia and iron deficiency are still regarded as the most common deficiency in Australia and finding good plant based sources is challenging for a lot of minimal or non-meat eaters – so this really could have significant impact on our nutrition if it is embraced by the ‘Superfood’ movement as heartily as the quinoa, coconut and cocao crazes before it!  I haven’t yet to be able to access information on the bioavailability of the iron from the indigenous boab, like all plant foods it is likely to be low (<10%), but in the context of such high amounts per 100g – it still presents as a potential large contributor to overall intake…and it’s native!!

According to Broome based dietician, Jenna Cowie,  who featured in the ABS report cooking a boab leaf pie

“It just tastes like another green vegetable, really, so raw it’s a bit more peppery, but if you cook it into things I don’t think you can really taste it,” she laughed. “It’s quite a coarse leaf. If you wanted to use it instead of spinach or something it might be good to soak it or bake it into something else. “But it’s also fine raw, so it depends on the person. The younger leaf is less coarse so some people like to use that.”

I’ve been increasingly aware of hype around baoab as an ingredient in some novel health foods.  You might have seen it marketed on packaging for new protein bars etc. here in Australia.  This baoab, however, is coming from overseas and is being attributed different benefits.  Why not get behind a local hero for a change and let’s see what the inclusion and promotion of our own  boab leaf could do to iron issues across the country!  Can’t wait to see the Adansonia gregorii boab leaf available in my local health food store in Byron Bay rather than all these imported ‘Superfoods’ 🙂

Did you know Rachel also offers Individual Mentoring? Some practitioners find that this is more suited to their learning style or want more focused attention. Many practitioners have this scheduled at a regular time monthly, while others use this service on an as-need basis. If this is something you’re interested in we can schedule a session for you, just email your enquiry to admin@rachelarthur.com.au.