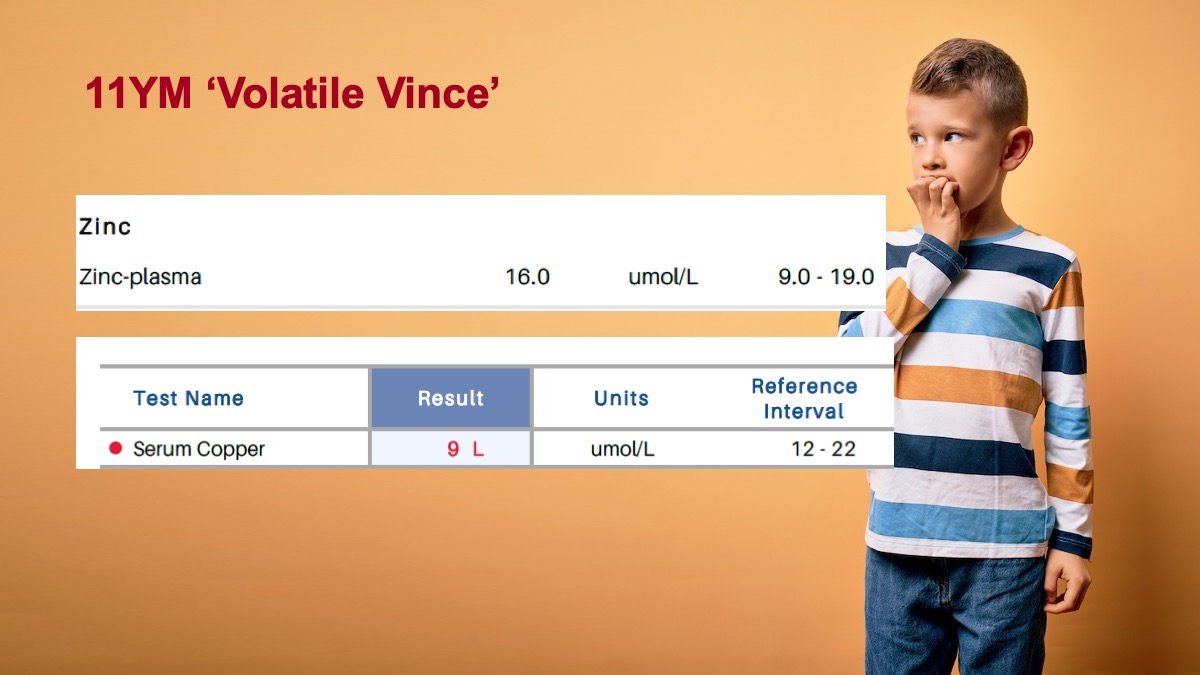 I haven’t personally seen every medical condition known to occur, nor every micronutrient deficiency  & toxicity picture in the flesh but that doesn’t mean I doubt their very existence.  Sadly, it would seem some practitioners due to a) not knowing ‘where’ to look in terms of best assessment medium and/or b) not knowing ‘what’ they’re looking at, when faced with an actual Copper deficiency, have declared this uncommon, but certainly not unknown, nutritional issue to be a figment of others’ imagination!

I know I’ve been fortunate to see more labs than most , a collection of my own, my student’s & my mentee’s patients, so let me share just 3 sets of results from 3 different individuals: an 11Y boy, a male teenage athlete and a female in her early 20s with an eating disorder, all with Copper deficiency.

Don’t worry, I have more – just ask.  What’s so dangerous about people spreading myths and misinformation in relation to copper in kids and teenagers specifically, is it shows complete disregard or ignorance of an understanding of how Copper is critical for development during these life-stages and how regardless of which developed country you live in Copper is expected to dominant over Zinc in blood, especially pre-puberty.

I’m sorry it’s just that my blood tends to hit boiling when exposed to the misinformed, misinforming others…
and that can make one call out in pain 🤯

You see, I literally heard a practitioner in an “educational” webinar purport that
‘Copper Toxicity is so prevalent in kids in her clinic’ and I was like,
OH.        EM.      GEEE.

Because if you start with that misunderstanding, and are unclear about what constitutes an accurate Copper assessment and how to recognise the pattern that follows low serum levels (each of these patients above had abnormalities in their FBE consistent with Copper deficiency) you are not only going to miss the thing you need to make a priority to fix, you’re going to make it worse!  Take ‘Volatile Vince’ the gorgeous sensitive 11Y boy I saw, whose increasing mood volatility had been misattributed to pyrroles and given large doses of Zinc!  So, Copper Crimes are a thing.  Guilty until proven innocent but in fact, never found innocent by some practitioners it would seem.  The ramifications of unchecked Copper deficiency include negative effects on mood and cognition, immunity, and the balance of other nutrients and kids are going to feel this impact the most!  What are the causes? Inadequate intake being uncommon outside of eating disorders, and excessive Zinc rarely the cause, we’re likely looking at a marker of malabsorption or a genetic issue.  Don’t buy into the confirmatory bias many use when they choose which research to read (risk of excess) and which to ignore (Copper as an essential mineral, critical to kids)  and let’s not discredit something as not being a thing because we haven’t seen it ourselves, yet, hey, anyway, at least, now we all have, right?!😵🥴😆

Copper, as a kingpin in angiogenesis, brain & bone building & iron regulation is a critical mineral during paediatric development. So much so, the kind of blood levels we see in a primary schooler might cause alarm if we saw them in an adult. So too their Zn:Cu.  But higher blood Copper and more Copper than Zinc are not just healthy but perhaps necessary during certain paediatric periods.  This recording redefines normal, low and high with a great clinical desktop tool to help you better interpret these labs, as well as reviewing the top causes and consequences of both types of Copper imbalance in kids.